I took stock of what I had on the go yesterday and I was shocked. How did I let it get so out of hand? It's not just one craft - it's knitting (2), sewing (1) and quilting (5). And I'm going to be starting another quilt in September. Something has to happen, and I've got time this weekend to see how much I can do.

The knitting is one pair of socks that don't stress me out because they're a travel knitting thing that I can always have at the ready. The other knitting is the shawl that I'm designing and I'd like to get to the end of the sample so that I can finalize the pattern and call it a day.

The sewing is the Too Cool for School satchel in a few Art Gallery prints. I think it would last longer with vinyl on the exterior or if it were canvas or something other than the most beautiful quilting cotton around, but the kid wants it just like that.

The quilting is ends and finishes on a preemie quilt, hand-sewing down the binding on the round robin quilt and three (identical) gift quilts that I need more fabric for (I'll get it tomorrow). Those three tops will then be sandwiched and quilted and I'll machine-stitch the binding on them.

I'm doing a Judy Neimeyer retreat in September and I'll be making the Dragon Star pattern. I'm getting fabric for that one tomorrow too. Very exciting!

I reported a finish a while ago, but only now do I have the photos to prove it. It's my Casual Friday cardigan with modifications. I did 3/4 sleeves and rewrote the pattern for the gauge I wanted so that I didn't have a fabric that I didn't want. If that makes sense to you, we're on the same page knitting-wise. I used 4 skeins of Ocean Park Yarns' hand-dyed yarn and the variation in the colour is really nice. I didn't alternate rows to avoid obvious differences in dye and it worked out great - I looked at the skeins and thought they were close enough, and there you have it.

So I went out to the junction to meet my knitter-friend Karen and she was kind enough to take these photos after dinner. It was a great dinner and it was about a million degrees outside. It was not an ideal day for knitwear. I wear this cardi SO MUCH, though. I love it.

I hope to see Karen again at the start of September. I'll know later today what my plans look like. Stay tuned, Karen! 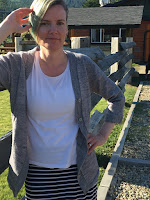 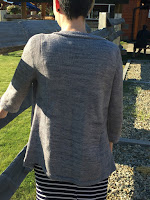 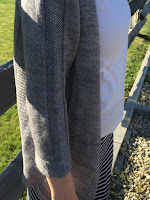 I have a beautiful skein of what used to be called CaterpillarGreen and is now called Gauge DyeWorks. I want the perfect shawl pattern for it that's not too boring and not too busy. I couldn't find anything I liked, so I'm designing one for myself. I prefer my shawls asymmetric, so it won't be a centred triangle. It'll be like half the triangle.

In other knitting news, I've worn that Casual Friday cardigan a fair bit and I have thus far failed to have a picture taken. I might have to visit my friend in Nelson for more pictures.

I've finished a few lingering quilts and am now faced with the excitement of starting the cutest little Elizabeth Hartman pattern, or finishing my round robin quilt. I have it partially quilted, but I really need to finish it. I think I will focus on that this week. It won't be anything fancy because it's just too darned big, but it will get done.

I finished this little guy for a coworker who's due in July. Our country's sesquicentennial birthday is on Saturday, so since her baby is due in that month, it seemed like a good fit. I had fun with the quilting in and around the leaf. It's 36 inches square (ish). The red and white are Free Spirit solids and I used a white thread for the white bits and red Aurifil for the red bits. I don't usually do that (use more than one colour), but I didn't want to mess up the design. I used white in the bobbin because the backing fabric is a grey-and-white polka dot with pretty big white dots. 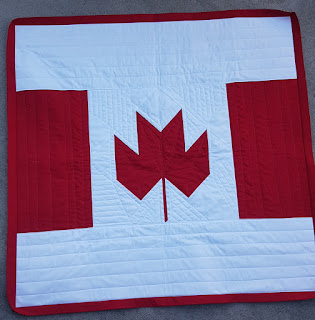 I belong to a traditional quilt guild and we had a show this past weekend. There were so many fabulous quilts hanging - it was a really great source of inspiration. Here are the winners. 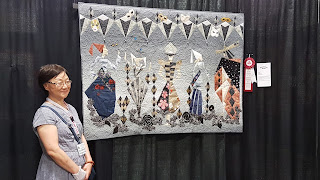 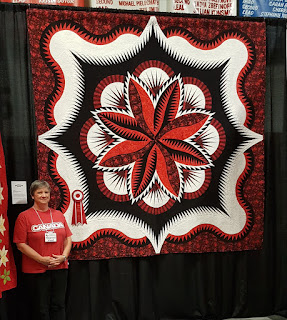 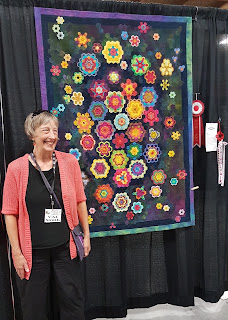 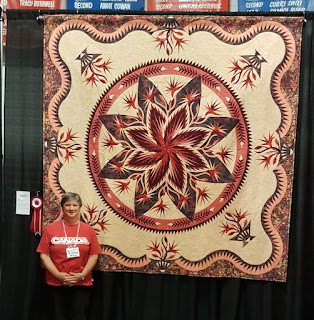 Also, we have a lizard in the house now. She's a juvenile leopard gecko. I have yet to touch her, but she's fun to look at. 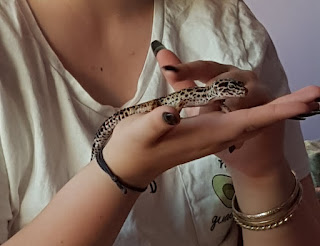 Could they be any cuter? They're made from the preemie-sized pattern for the Baby Surprise Jacket by Elizabeth Zimmerman. I should have had something for scale so you could see how wee they are. They're done in worsted weight, so they should actually fit a newborn of full term, but they need a blocking first. And they need buttons. I used a 4.5mm needle as recommended in the pattern for a newborn size with worsted-weight yarn, but I might use a 5mm needle next time. 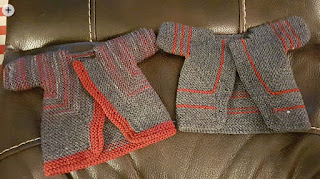 They're made from leftover yarns and were quick and easy to do. I would just caution a person to mind the instruction for the ssk abbreviation - it's not what you think it is.

I also finished the Casual Friday cardigan for me (except for the buttons) and I've worn it a couple times, but I don't have a picture yet. I deviated from the pattern because my gauge was WAY off and I didn't want to change my needles or my yarn. I rewrote the pattern in consideration of my gauge, and I finished the sleeves without additional decreases at a 3/4 length with seed stitch. You'll see.

Camping last weekend, I saw a shirt with a very interesting design on a young girl. I'm going to sew one up this weekend and we'll see how it turns out. I have a great piece of fabric that I've been dying to use.

I will admit that I haven't finished hand-sewing the binding on the main quilt from the Katie Pedersen workshop, but the cushion cover and the two preemie quilts are done.

I did straight-line quitling on them both, and used striped binding. The piecing and quilting was all done on my Janome 8900 with Aurifil 50wt in 2600 (dove gray). 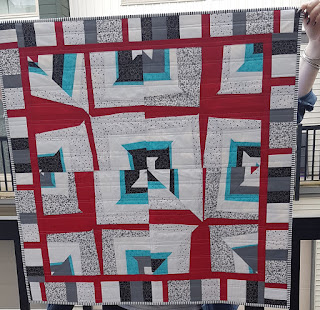 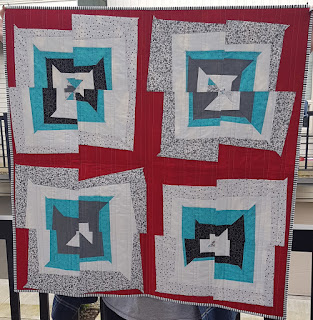 On the cushion cover, with the few leftover pieces after all the other quilts were arranged, I did some free-motion swirls. I did an envelope back and although I could find a pillow form to fit, I decided to fill the cushion with quilts. There are two quilts inside, which makes the cushion really heavy and quite solid, but also gives us easy access to the quilts when we are chilly. 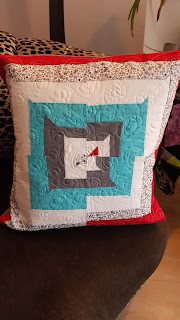 This is the straight-line quilting on one of the preemie quilts. I used the sticky-outy bar to get the distance between my last line and my next line, but then I used the width of the foot for the next line. With all the pieces so wonky, it was impossible to use the quilt to keep things straight, so I had to be careful with the first line at the centre joining point, and then follow that line for the rest of the quilting. 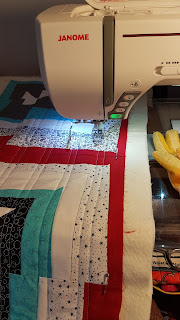 This is my super-cute dog. She was lying there so pretty, like she was posing for a picture at the Sears Portrait Studio. 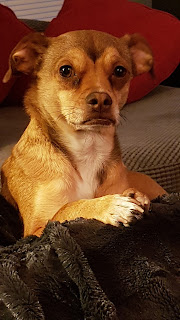 We went to Granville Island for a bit of shopping and we went into the Cloth Shop, which is a lovely little shop. She picked out three Art Gallery fabrics and I'll sort out something to make her. The fabrics have a beautiful hand and will be absolutely delightful to sew with. 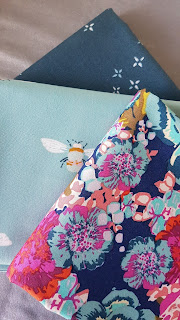 I'd better get on with hand-sewing the binding on that Psychadelic Baby quilt. Sixty square inches. It'll be a while.

And then I made a wallet

I actually made 2 wallets but the first one was really ... overboard. I broke my walking foot on it. It's fixable, but also regularly rebreakable.

Both wallets are made on the Slimline Wallet pattern. Six card slots aren't enough for me, so I added a second unit to the design.

Wallet #1 had the increased bulk of RFID-blocking fabric in the card panels. For the record, I don't think I needed that technology in my fabric but I bought it on impulse and thought I should use it before I forgot was it was. It also had leather from my old couch as its exterior and that added even more bulk. I had trouble getting the stitches to behave and I don't think my machine (a good Janome 8900) would like to do the top-stitching to finish that wallet off. 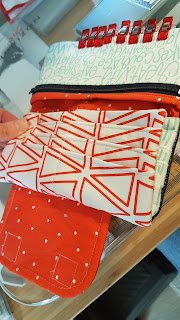 So then I cut the fabric for wallet #2 and didn't use linen on the outside, but instead pieced a 9-patch of 2 kinds of stripes. On the inside, I have three colours of reverse dots. 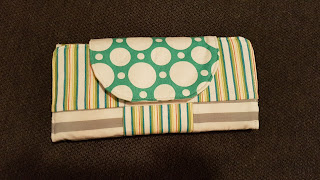 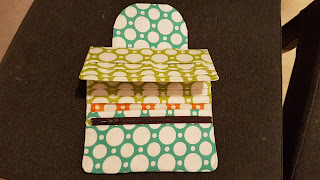 This is the extra card slot unit: 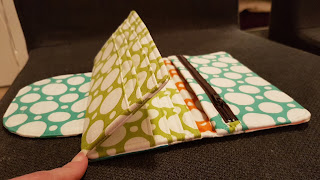 It's a pretty quick pattern, especially the second time you make it.

Posted by Debbie at 5:36 PM No comments:

Debbie
Canada
Today's random word of the day is: RANDOM.